The 9 PLANETS: The NAVAGRAHA:

Here is yet another amazing but quite unusual numerical Revelation Code-Breaking Series based upon the ancient attributes of the Hindu 9 Planets and how they relate to specific Numbers.

Often in my research I make the general claim that Everything In Mathematics has its roots or basis in the Number 3, the Trinity.
This Code 9-9-9 revealed here clearly shows that this whole investigation was based on 3: The Magic Square of 3×3 that was written in 9 various ways, depicts the dance of the 9 planets.
We start with 3, then 3×3 which is 9 numbers contained within the Square, then with the 9 variations we see that there are 9×9 = 81 or 3x3x3x3 or 3^4 numbers contained with the astronomical matrix. And finally, the revelation, that the total sum of all 81 numbers is 9x9x9 or 9 Cubed or 3^6.
We have, in effect, climbed the dimensional ladder, from 9 to 9×9 to 9x9x9.
My question would be, did the ancient Vedic rishis, the Learned Ones who composed this galaxy of numbers, knew it was 9 cubed? Was it by design or chance. Either way, there is more to be revealed.
Cubic also suggests the underpinning Crystalline Matrix of the Creation.

nb: The sum of each row, column and diagonal, called the Magic Square Constant, for each Magic Square or Planet starts with 15 and keeps increasing by increments of 3. But we are interested in the TOTAL SUM OF ALL 81 DIGITS:

Let me take you on a Journey from the Moment of Conception, evolving to the Seed Of Life, to the Flower Of Life. This is the Story of Your Creation, from Biology to Technology, from the Micro to the Macro, from the original Zygote to the formation of Stars. 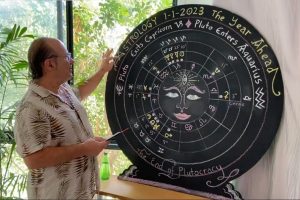