Walter Russell was born in Boston, Massachusetts, May 19th, 1871, and died 1963. He was known for his achievements as a painter, sculptor, author and builder and less well known as a natural philosopher and for his unified theory in physics and cosmogony.

He posited that the universe was founded on a unifying principle of rhythmic balanced interchange. This physical theory, laid out primarily in his books “The Secret of Light” (1947) and “The Message of the Divine Iliad” (1948-49), has not been accepted by mainstream scientists. Russell asserted that this was mainly due to a difference in the assumptions made about the existence of mind and matter; Russell assumes the existence of Mind as Cause while he believes that scientists in general assume the existence of Mind as Effect. Quantum physicists are only recently recognizing the depth of truth contained in his writings on the subject.

Walter Russell also wrote a classic: The Universal One. In this book, he examines cubic structures and axes of systems, understanding that Crystals respond to both Mind and Geometry. He states some peculiarities of how some crystals, like Staurolite, can grow through each other, called Crystal Twins or twinning, is beyond human comprehension, that scientists today are not ready to understand these secret keys that Crystals hold in their Atomic Memory. Crystals represent an advanced body of Ancient Knowledge that we can only grasp when we understand the Law Of One Mind.

In 1927, Walter Russell published The Universal One, his first attempt to explain the Cosmic Laws for the established scientists. As he failed completely, he worked another twenty years on it. The result is his The Secret of Light, which he published in 1947.

In 1941, the American Academy of Sciences conferred a doctorate on him, after several laboratories had isolated the elements which he had foreseen: Deuterium, Tritium, Neptunium and Plutonium.
This is all very amazing for a young man who never entered high school, and could play any tune on the piano with one finger, before he could walk or talk, having learnt how to Connect with the Divine via a blind man who was his neighbour and instructed him upon the art of playing the piano! 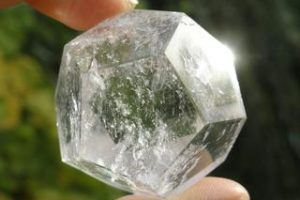 The Cube & the Natural Crystal World