I am proud to release another rare gem based on the Infinitely Repeating 60 Final Digits of the Fibonacci Sequence. When I plotted the 60 numbers on graph paper, (like the work of Ulam’s Rose revealing the 24 Pattern of Prime Numbers, and the stock-marketeering work of Gann’s Wheel of 24) I discovered that after 60 steps, the pattern RE-ENTERS ITSELF or ends where it begins, thus forming a predictive, cyclic pattern of the highest order that has applications with 60 hertz frequency and other hi-tech connections regarding frequency and vibration. It asks the question, did Tesla base his life-giving innovations on this distinctive 60 periodicity that obeys the Laws of Nature.Jain 108ps: I will explain this in further detail on Facebook soon. This revelation has never been published before in print and will appear as a 15 minute video discourse.

Did you know The Golden Ratio is part of our cellular memory? That it permeates all of creation like flowers, crystals and pyramids?

CHLOROPHYLL: 137 Atoms in the Molecule! 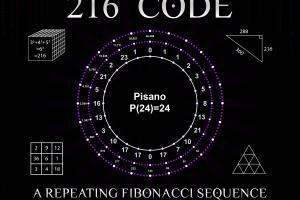